Watch Video Play
How to transform players into legends to celebrate Clash Royale’s Summer of 2v2?
1 / 1
Prev Next

Firstborn created a real-time video generator to celebrate “2v2”, a special game mode in Supercell’s App Store megahit Clash Royale. While Clash Royale is normally a single-player game, “2v2” allows players to team up and compete against one another in a no-holds-barred battle for victory. The feature was so popular that Supercell integrated 2v2 into the game for the entire month of July—and tapped Firstborn to support the launch.

We knew that existing players were already going to play the heck out of 2v2, so instead of a big, media-driven campaign to get them to do more of the same, we took a different approach—focused on giving engaged players a new way to publicly declare their love for 2v2 over social. To do so, we created “The Legends of 2v2”—a community-focused experience highlighting player’s camaraderie and emotional spirit through customized user-generated videos primed for native sharing on Facebook.

The meat of the experience is a custom video generator that gives players the ability to create personalized content featuring their team. Users select a chapter from the “Legends of 2v2” Clash Royale tome, upload their team’s information and watch as the site dynamically generates a customized video story on the fly. As the entire experience is Facebook Connect enabled, after the videos are created users can seamlessly share them to their walls for added reach.

The program’s creative direction stemmed from true, community-gleaned gameplay insights filtered through a “fairytale” construct—brought to life with multi-layered visual expression. Each page of the story became an illustrated vignette, featuring 3D characters posed out over matte-painted 2D backgrounds—a bespoke “2.5D” approach. After the characters and story were crafted for maximum impact, each scene was enhanced with added motion, animation, particle effects and lighting—bringing each chapter to life as a fully realized scene.

To generate the dynamic videos within seconds, we provisioned a serverless infrastructure leveraging Amazon’s Lambda to run FFmpeg and ImageMagick. This gave us the power to be able scale immediately while reducing overhead costs, allowing for over 1,000 different users creating personalized videos at once.

Combining customization with craft, we elevated players’ individual partnerships into Legends worthy of being shared. During the two-week campaign, the experience generated almost a million sessions resulting in 180K videos created. 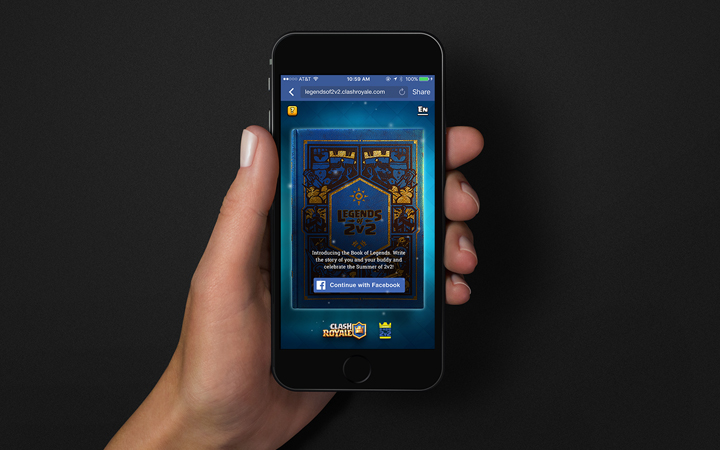